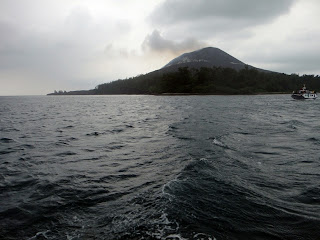 Lampung, my first destination to Sumatera. Yes I was born in Pekanbaru, visited Medan, Padang, Batam, but I never traveled ala backpacker to Sumatera. That’s why I felt so excited when I stepped on the ground ! I followed tour packacge, it costs 350k started from Merak. So from Cikarang, I used bus to Merak 28k, then from Merak using ferry to Bakaheuni. They rent angkot taking us from Bakaheuni to Pelabuhan Canti.
Then we used boat to explore that area. Approximately, I took almost 8 hours from Cikarang to Pelabuhan Canti. Cikarang-Merak 4 hours (bus stops in some places), Merak-Bakaheuni 2 hours, Bakaheuni-Canti 2 hours

Our first destination was Sebuku Kecil Island. From Pelabuhan Canti took about 1 hour. It was small island, where the sands are mixed with the death coral. The water is very blue and it’s nice to spend time there. 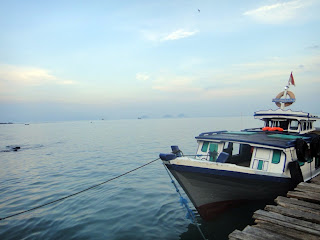 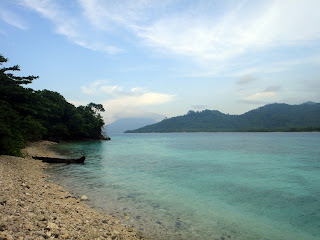 After about an hour taking pictures, we continued to the next island, Sebesi. This was where we stayed and took rest. We stayed in the people’s house. Same as most islands, the electricity was off in the day. It was comfortable enough, the people were friendly, but the problem is HOT ! One night, I woke up from my sleep because it’s too hot. But I managed to sleep again though because I’m so tired hehe. 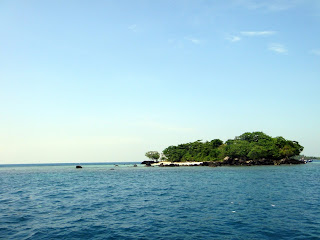 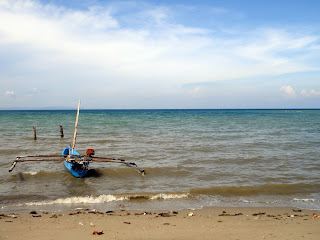 View of a beach in Sebesi

Still on Friday, about 3 p.m. we went to Umang Island. I was a beautiful beach ! White sands with some rocks, I felt this beach is different from the other. Let’s see the pics 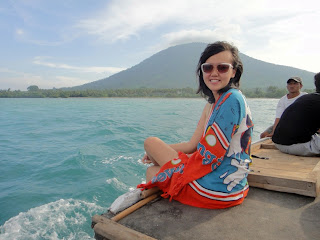 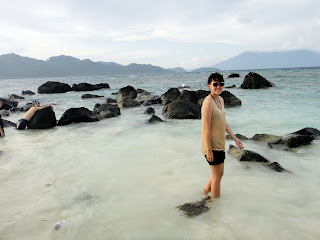 Wow, look at the unique white beach and the rocks ! It rocks !
I heard that there are jellyfishes around Sebesi Island but I couldn’t find it. So sad =( I only found one. But it’s not as beautiful as I expected. So i didn’t go snorkeling. I hate being wet.
Sunday
We woke up early morning. Our schedule today is Krakatau. Yay ! About 2 hours from Sebesi, I slept in the boat, afraid of seasick. Hehe..Then we arrived ! So if you knew the history, there’s mother krakatau, and the son. I don’t know how to explain, but better check google for more information. The former Krakatau is no longer active, but her son, “anak krakatau” is still active and unpredictable. Still splitting the rocks and dusts. In this Taman Nasional Krakatau, we could find Biawak (how to say in english?) it’s a big lizard, and when I searched google, it’s Varanidae Family. They’re cute. hoho.. And for your information, some sources said that if you want to visit anak krakatau, you need to ask permission in the office, Lampung city. But I asked them, there are some men in charge, because too many people came to krakatau directly, so they permitted the visitors came directly to the basecamp. And also the last border is patok 8. We cannot go further than that. Hmm..The track is sandy. I think it only takes abut 30mins trekking. and it’s much faster to go down than up.
Oh God ! It’s so beautiful up there. Wide sea is in front of us ! We can see mother krakatau hehe..and also, some part of the anak krakatau body is i don’t know either sulfur or calx or what, but it’s white looks like snow. What a wonderful landscape ! God is sooo amazing !! 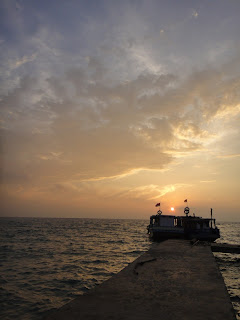 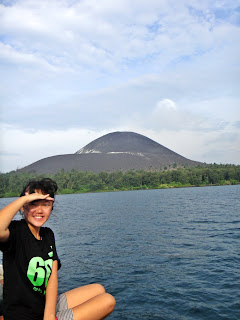 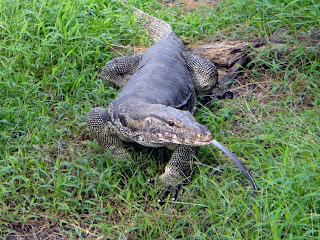 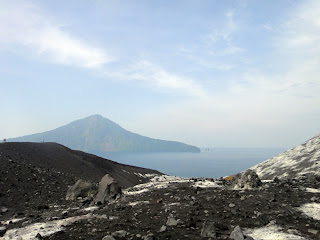 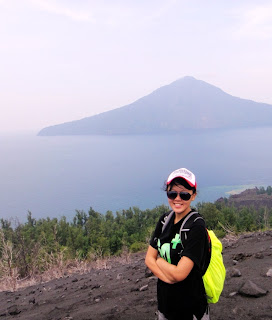 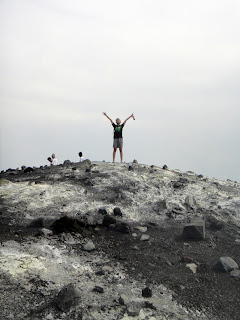 Looks like in snowy place right?
After taking so many pictures, we went down. Left Krakatau to Lagoon Cabe, when we just left anak krakatau we could see the smoke from the peak of Anak Krakatau. Lagoon Cabe, they said it’s beautiful to see the coral. But I wasn’t interested. I just wanna see jellyfish, remember? Haha. So i stayed on the baot
Our way back home from krakatau to sebesi was totally insane ! The weather was not good, it’s raining and the tide was so high. I kept closing my eyes and laying afraid of seasick. The scariest thing was when the people asked us to wear life jacket! I was totally afraid and what I did was praying to God, hoping we could arrive safely. All possibilities around my head such as if the boat was turned upside down, what would it be? swim to the nearest island with that really high tide? drown by the wave? how to send SOS? all of them keep spinning in my head. That small boat against the big wave?! The sailor was really awesome. Thanks to him we got back to Sebesi Island safely. It took 3 hours to get back to Sebesi.
It was a tiring journey but I enjoyed it ! I just realize that Lampung has many beautiful beaches, and also the view up there in anak krakatau, AMAZING ! So for you guys wo will visit there, be ready to feel the wonderful God’s creation.
Traveled in 19-20 May 2012
Thanks to Ko Acong
0shares
BackpackingBeachSumatera
by Velysia Zhang
Leave a comment

Indonesia
My First Encounter with Orangutans

Indonesia
7 Things You Can Do in West Sumatra