Last year on the exact month September, I tried to reach the highest peak in Java, but unfortunately I was unable to step on that highest peak, Mahameru. After one year, I came back to test my fortune back to climb Mahameru. I felt like the time had stopped at that moment when I heard someone’s screaming “Summit attack is not allowed”. My friend tried to calm me down, saying that it’s just their trick to diminish the number
of people to continue their journey to the top of the mountain. It’s ridiculous. No one came to Semeru only up until Kalimati. Ranu Kumbolo still make sense. I just could pray to God that we could do the summit attack.

12 a.m. Iky, Vivi, and I were ready to attack the summit. I insisted one person one bottle, learning from past experience when we ran out of water. Ko Anton’s not following because of his injury. We just walked few meters than someone stopped us. He asked, “Avtech or non avtech?”, I replied, “no”. He asked, “Do you have your identity card and letter from basecamp?” “Yes, we have in our tent.” So we went back to our tent. “What are we supposed to do?”, asked Vivi. I said, “Let us take our id card and medical letter.” We went back to that place, and we passed by, and another guy stop us. He was from avtech, also participant. Quickly we told them we were avtech and then we joined their group to climb the peak.

Here we go, to Arcopodo. The track was steeper than before and we had to QUEUE UP ! Too many people ! Problems happened when Vivi’s sinus relapse, her stamina dropped, and she couldn’t able to go up again. Iky and I had tried our best to cheer her up. She did her best, but then she didn’t have energy left. Luckily there was a girl who’re going down, gave up for the summit. We commended Vivi to her, then continued hiking up. Passed Arcopodo, here’s the real challenge, the sandy part. Climb up three steps, slipped down two steps. This is the hardest part ! But holy crap, still queuing up. The line was not moving about 10 minutes. We could see one line lights covering the body of Semeru. Climbing at this time was easier than a year before. It’s raining before so the sand is more dense and compact, and many foot steps on the ground so it’s easier to step again on it.

Iky and I waited each other. We didnt want to separate far. Suddenly, I heard people screamed from above. “WATCH OUT ! BIG STONE !” You know what I saw at that time? Something that only I’d seen in movie? Yep. A big stone fell just like in 5 cm movie trailer. People tried to avoid, but one guy got hit by the stone and he rolled down. Someone in front of me tried to run to the other side and he almost pushed me away. It was totally chaos. Fortunately, the stone fell to the cliff before it fell further and reached where I stood. Iky called my name and asked if I was okay. I was okay but mentally I was shocked. My body trembled and my heart beat so fast. The guy who was hit by the stone and fell down was caught by some people. That guy was just about 30 meters on my left side. People shouted where’s medic? where’s medic? who got tissue to stop the bleeding? When the incident happened, all people stopped hiking. I heard people shouting, “Hey you guys up there, don’t step on big stone ! You know how dangerous it is? look at what have you done !” The activities stop for few minutes than back to normal. I think that guy was saved by the medic and I think he had been brought down by the medic. So scaryy..

The sun rise and we had not reached the peak yet. I kept spiriting myself not to give up. I’ve gone so far, sacrificing my final presentation, I got water this time. I caught a cold and not feeling well. Iky before walked a little bit far behind me but now he had walked after me. Whenever I saw people going down, I asked how long is it to the peak?? They said maybe one hour. Shit it’s in front of my eyes but still an hour? Be strong vel be strong. I cheered up myself. Again I asked, how long again to other guy, 30 minutes maybe. I walked and when I asked again, about 30 minutes. Shit,, why it’s so far. Finally, I saw Iky’s waving his hand and not long after that I reached the highest land on Java. I lied down and rest. “Let’s take picture, velyz” “Are you crazy? wait me rest for a while.” I was soo happy yet tired, I thanked to God, I felt moved and grateful. Finally !!! The ground suddenly trembled and bushh, Wedus Gembel, an explosion from the crater. Without wasting any time we directly took our picture. The funny thing was we had to queue up even to take photo with the flag and the sign of Mahameru. 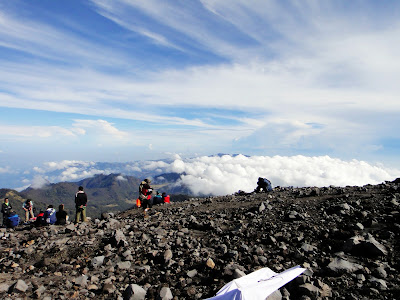 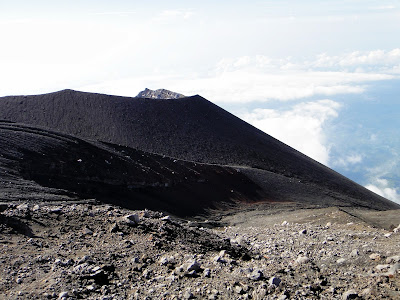 After satisfied taking photos, we went down. It’s much more faster than climbing up. You can run and only takes not until an hour to get down. It’s like playing ski. But I got problems going down because literally I don’t like going down. Reached Kalimati and then directly went down to basecamp. 12 hours to basecamp can you imagine?? normally it just took 5-7 hours to reached basecamp. But my friends got injured. Ko Anton and Vivi hurt her ankle. We arrived at basecamp on 4 a.m. sleep for a while and then back to Malang. Thanks everyone =) Still Semeru is a mountain fulled with stories, memories, efforts, tears, everything. I got a quote from Ko Anton. Semeru is like a place of pilgrimage. It’s like Muslims go to Mekkah, so do hikers hike Semeru. You are not counted as a hiker if you have not hike Semeru. LOL