Blue Mountain and The Sisters

One of the top destination where often people go around Sydney other than Sydney Opera House or Bondi Beach is Blue Mountain. Many would expect the mountain is blue, at least there’s something blue around this mountain, but in reality it wasn’t. It was explained that it was so named because of the mist and the haze look blue in distance. Isn’t it all mountain look blue from distance?

Apart from its name, Blue Mountain has it’s own charm that draws people in. It doesn’t necessarily resemble blue and mountain. The area itself is an uplifted plateau. Perhaps that’s why it doesn’t seem like mountain to me, more like an immense valley instead.

Dozens of people who just arrived in this area will normally make their way to the view point named Echo Point. It’s the best spot to admire the vast and pristine landscape and having a closer look to the exceptional rock formation towering above Jamison Valley, the Three Sisters.

Looking at the “star” from the Echo Point was enjoyable enough to please my eyes, turns out it’s possible to get even closer to them. Eventually, it’s real enough to walk between the rocks, how amazing was it? Well, it’s required to do short walk through a trail ended with steep rocky stairs before the bridge through the Giant Stairways. Next, you’ll be connected with the first sister. The iconic bridge is called Honeymoon Lookout. There must be a reason why it’s called honeymoon lookout. They said over a hundred years, honeymooners have flocked to this site to create the scenic and romantic photo shoot.

Blue Mountain National Park offers a lot of bushwalking trail from easy to higher difficulty level. I picked the easiest one as I had only one day, the Giant Stairways and Prince Henry Cliff walk which directed me to Katoomba Falls. The walk took about 30-40 minutes one way to Katoomba Falls. The trail was easy, shady and allow us to view the scenery from different point. Katoomba Falls was not as appealing as I expected. To be honest, it’s nothing, compared to the waterfalls that I’ve seen. So, that’s how my day was well spent. I might come back and do another challenging bushwalk. To be continued…

– Blue Mountain can be reached by train from Central Station to Katoomba Station more or less 2.5 hours. Price depends whether you’re using Opal Card or just normal ticket. If you’re using Opal Card, it’s AU$ 5.81. Get an Opal Card while you’re in Sydney. If you travel on Sunday, the maximum fare charged to Opal Card is $2.50. So it’s way cheaper to travel anywhere around Sydney on Sunday

– From train station, exit and cross the street, then walk to the left towards intersection and turn right to find the bus stop. Bus number 686 will take you to Echo Point.

– If you prefer to see more of the national park, you can take hop on hop off bus or trolley tours to save your time while checking more spots. 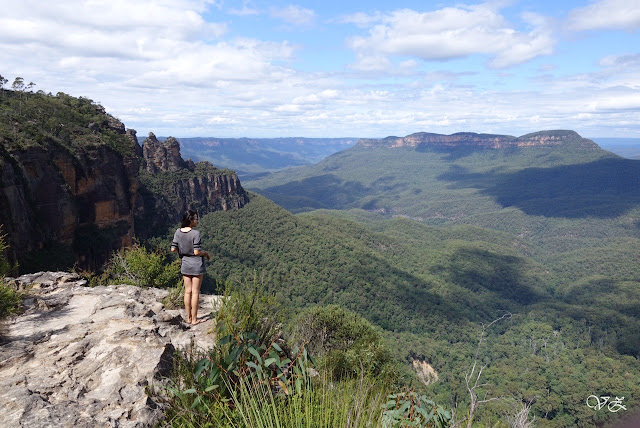