The Greatest Heritage Site of Cambodia 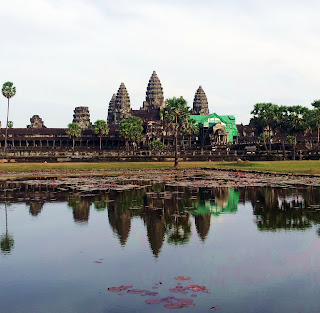 Hey guys, I should’ve been posted this long time before, but I’ve been a little bit busy, lazy actually to write down my journey to Cambodia and Thailand. Again, I got cheap flights from Air Asia, I love you so much. I had Rp 86,000 for Jakarta-Kuala Lumpur, Rp 150k KL-Phnom Penh, Rp 90k Bangkok-Phuket, and Rp 286k for KL-JKT. I cancelled my ticket from JKT-KL and bought one from PKU-KL because I was
traveling and my last stop was in Pekanbaru. Cheaper than I had to buy ticket again from Pekanbaru to Jakarta. 5th January I flew to KL and slept over a night in the airport because my flight from KL-Phnom Penh was 6.50 a.m. in the morning.
6 January 2013
It takes only an hour from KL-Phnom Penh. People can’t really speak English there. Every time I asked they would just said ya ya ya but actually they didn’t understand. I got motorbike (with the driver) outside the airport to take me around. I said I wanted to go to Royal Palace, he answered ya ya, as the result he brought me to….I said not this one, I showed him the map, he acted like he understood, (I doubt he could read alphabets), he stopped someone else, that guy could speak English, and I had to explain again. Finally the driver understood me and brought me to Grand Palace.
I saw a big picture of a man, apparently Royal Palace was closed at that moment for three months because the king died, the Silver Pagoda was still opened for public, I didn’t get inside because the price was a little bit expensive for me. 6 dollars to visit Royal Palace and Silver Pagoda, Royal Palace’s closed but still have to pay for 6 dollars. Hmm. FYI, in Cambodia they receive riel, dollar, and pound, so don’t worry. Then I asked the driver to bring me to the bus station, catch on the bus to Siem Reap, the entrance city to the magical mysterious heritage, Angkor Wat.
I checked in to Garden Village Guesthouse which I booked before on hostelbookers.com. Wanna know the price?? $1 per night! Supeeerr cheap! No wonder it’s so cheap.  A mattress which is positioned beside the path where others can pass through to the other room. It’s oke for me, as long it’s cheap. Make sure you bring you mosquito repellant. Tiring day. I went to bed early to catch up sunrise on the next morning
7 January 2013
I planned to get up on 4 but i woke up at 5. I’ll be late for sunrise. Shouldn’t be late if I took tuk tuk because it’s only 15 minutes. Different story because I went there by bicycle. I chose to rent bicycle for only $1 rather than using tuk tuk for $20 ! I took the map, then cycled in the darkness. 30 minutes cycling and I could see the dawn lifting up. I didn’t know whether I took the right or wrong way. There’s nobody to ask. It’s getting worst when my bicycle chain loosened. Old bike so I knew how to deal with it.  Finally, 15 minutes later I saw the checking point. I was happy, only for a while after they asked me about the angkor pass. I thought it was here and he said, no it’s not here. Then I asked where it was, 10 km return to buy angkor pass. Shit! But then they helped me to buy the ticket with motorbike but I had to pay $2. Sigh. I had one day pass which cost $20.
I read a book before suggesting to go to east side first to avoid crowd. Usually tourists will go north to Angkor Thom, Bayon, then to the east. So, do the opposite direction. Still will find many people, at least, less crowded. My route was Kravan-Bat Chum-Banteay Kdei-Ta Phrom-Ta Keo-Thommanon-Bayon-Angkor Thom-Ta Phrom Kei-Angkor Wat in a day, with bicycle.
I felt different sensation. It’s like sucked to another dimension, to the past. I was really excited exploring this heritage site. Some ruins are very artistic and majestic. Lucky me, the weather was nice. Sunny, but not too hot. I spent my whole day to explore some temples. It’s too huge to be explored in a day. If you have more time and budget, you can buy three day pass or one week pass. I’m very proud of myself. Cycling with no gear bicycle for about I don’t know, 30 kms maybe? Remember to bring more mineral water. Enjoy the pics.
Along your way, you will find little kids selling souvenirs. It’s kindda heart-breaking looking them selling souvenirs rather than go to school. On the other hand, I really admire disability musicians performing in some temples. They really do something to ask for donation. Proud of them. I found out there are some social communities who help the poor in Cambodia. Should do that in Indonesia =)
Ta Phrom, one of the most amazing temple in this site. This temple is popular after the movie, Tomb Rider. I just couldnt imagine how this tree can create such an art. Roots creeping on the ruins, amazing!! 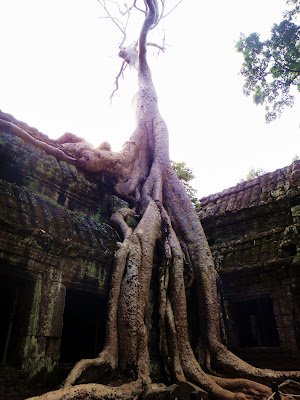 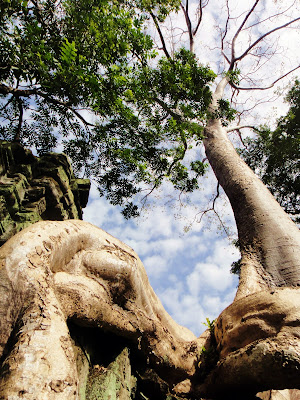 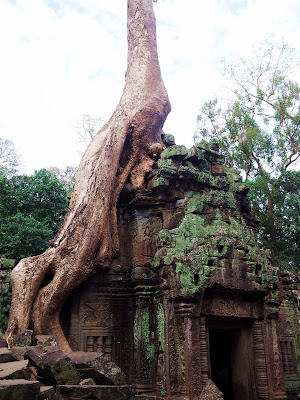 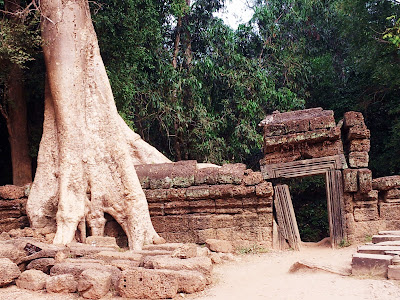 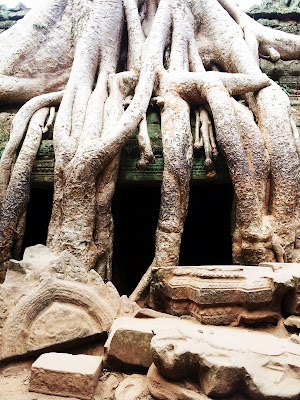 I couldn’t remember what temple is this. Truly apologize for not writing my blog as soon as I experience my traveling. Otherwise, I could remember and write better. This temple has steep stairs. Be careful when you go down. 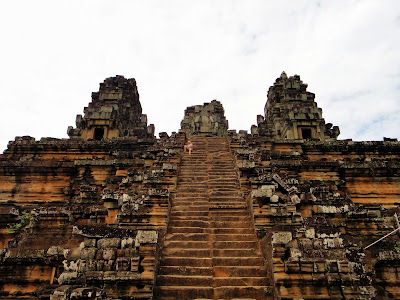 Bayon is the central of this complex temple site. I was totally mesmerized by its beauty. So many interesting objects to be shoot as a photographer. It’s just so amazing. The stones, the carvings, somehow it brought me back to reflection of temples in Yogyakarta, such as Borobudur, Ratu Boko, there’s one point when I felt like I’m in Borobudur. 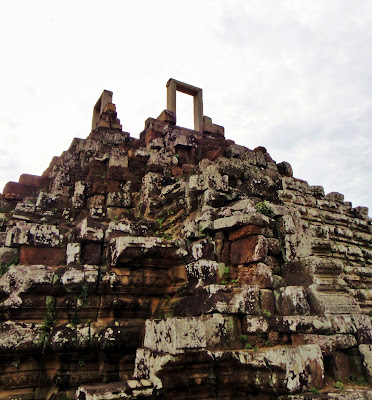 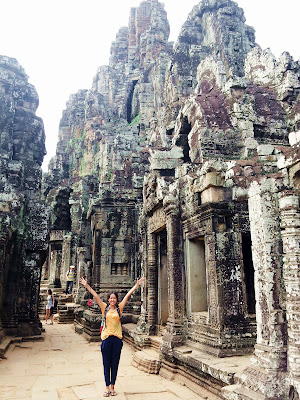 Let me tell you a story. I got into this temple, Bayon, and admired everything, captured everything with my camera, and enjoyed the amazing structure of temple. When I finished and went back to pick up my bike, I couldn’t find my bike!! Cmon, Am I that bad luck? I lost the bike and had to pay for my way back, and get a new bike for the hostel?? Instead of pressing budget, I have to spend more because I lost my bike? I was soo worried. I asked people around that and he wanted me to make sure it’s the right place where I put my bike. I insisted, I told him I was so sure I put my bike here. There’s a policeman nearby who couldn’t really speak english so I asked him. Again, the guy that I asked before asked me back until he said there’s four entrances in this temple. Wait, Something’s not right. I recalled my memory back, it’s different when I got into the temple. There should be a Buddha statue but I didn’t pass through it on my way out. I shouted to the policeman who had walked pretty far looking for my bike, told him I’ll try to find it by myself. I walked around the temple hoping I could find my bike. Guess what?? I was totally forgot about my lost bike after I saw the outer scenery of Bayon Temple…It was soooo amazing! I even stop and ask people to take my pics. Finally I found my bike on the other entrance. I was very grateful to see such a beautiful different side of the temple. Thank you very much God. Actually it’s safe leaving your bike in the temple area, but to prevent loss, lock your bike. 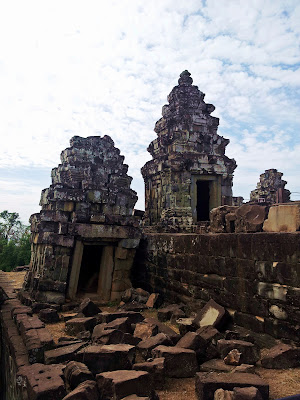 Started at 5 a.m. and finished at 5 p.m. Went back to town, had cheap massage. I knew why there’s so many people do massage! Not because of cheap price, even if you take bus or tuk2, your tiring legs will force you to take the massage. I felt strange, it’s guy who massaged me. He’s trying to flirt me but actually he asked for tips. He asked me to come back on the next day and he’ll give me free massage. Such a funny experience. The way they do massage is different in Indonesia. No worries, no extra things happened between us =P

I decided to extend one more day because of the cheap hostel. I could save some pennies. Not much thing to do. At night I walked to night market and pub street. I met a guy called Patrick when I wanted to buy bus ticket. He’s going to Vietnam and I was going to Bangkok. We had dinner together with his other friends, and he treated me. Very kind of him. Somehow I love Siem Reap night life. The night market, pub street, it’s fun but not too wild, so I really like it. 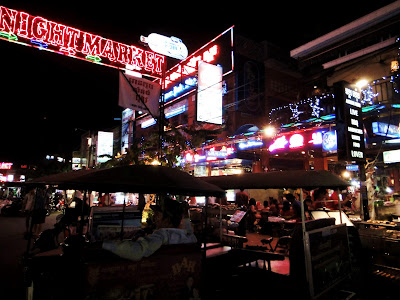 In total, I spent about $60 all in Cambodia including bus ticket to Bangkok $8.5

Vietnam
Traveling in Vietnam: From Ho Chi Minh to Hanoi