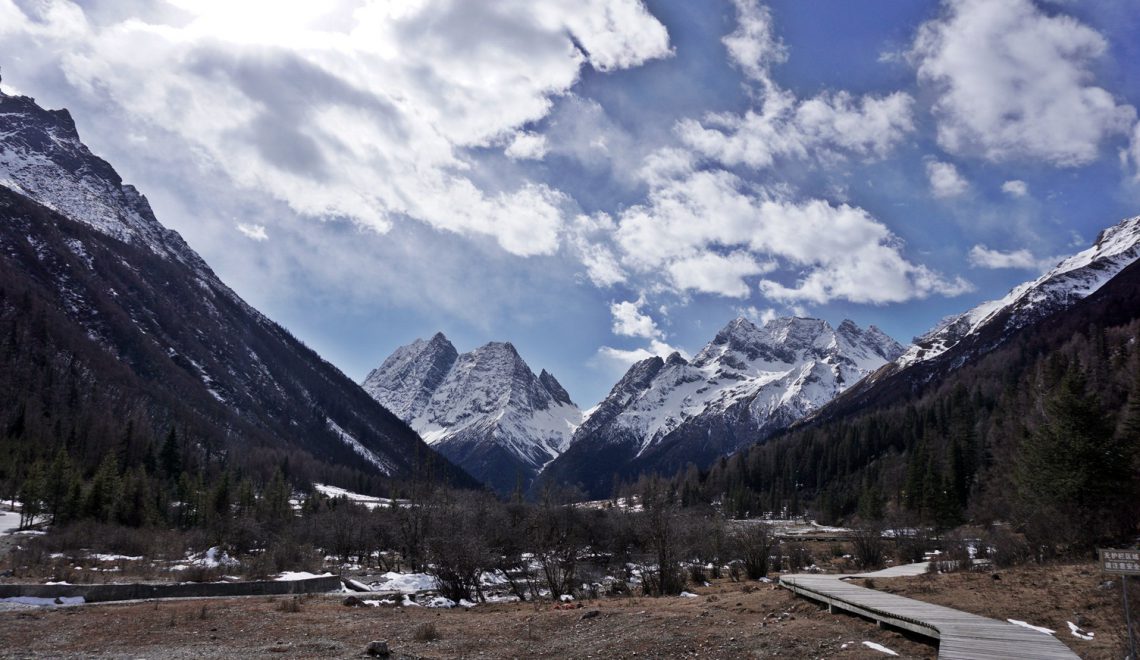 Sichuan as a province on the southwest China is blessed with its natural beauty. One often described and mentioned is the Four Sisters Mountain or Siguniangshan. The mountain consists of four main peaks with Yaomei Feng peaking 6,250 meters above sea level. Three valleys accessible for visitors around the national park are Changping Valley, Shuangqiao Valley, and Haizi Valley.

Being busy with my school lately, I haven’t got a chance to do proper travel that I always planned beforehand. Then one day, suddenly I got a mountain sick. Is this how you call it, similar to home sick kind of feeling, lol. I didn’t really care about anything, I just needed to be in a mountain. That’s how I planned this sudden trip to Siguniangshan, not too far from Chengdu and I could do it by myself as well. So yea, let the adventure begins!

Thursday morning, I woke up super early. I even set multiple alarm time afraid that I would keep sleeping and missed the bus. I arrived to Chadianzi Bus Terminal with taxi around half an hour before 7, thought the bus would leave at 7 so I was in rush. However the schedule is at 7.30 normally so I was too early. It was still dark and chilly, yea it’s winter time. I got my ticket to Xiaojin, hopped on the bus and waited.

The bus journey took roughly around 4 hours which was faster than I expected. I slept almost throughout the whole ride until suddenly I opened my eyes and found myself surrounded by snow-capped mountains! The road was winding. I could tell that we’re on a high elevation. Sometimes my ears popped adjusting to the elevation. I didn’t close my eyes back to sleep, instead I kept admiring the view. We passed through a long tunnel, how the hell they could cut the mountain and built a tunnel this high? I kept wondering. 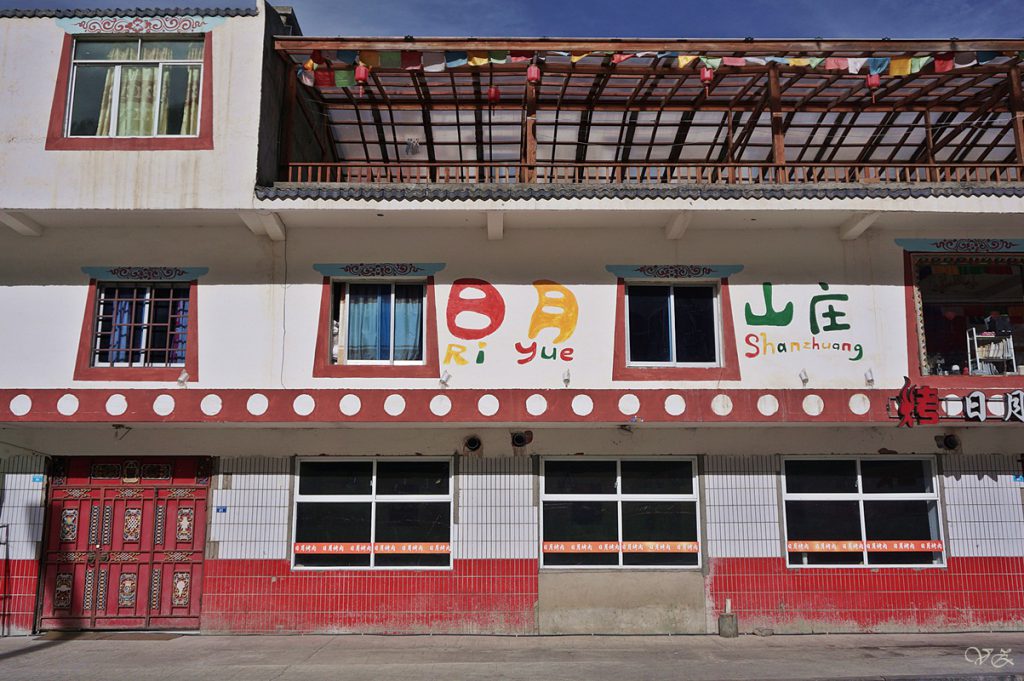 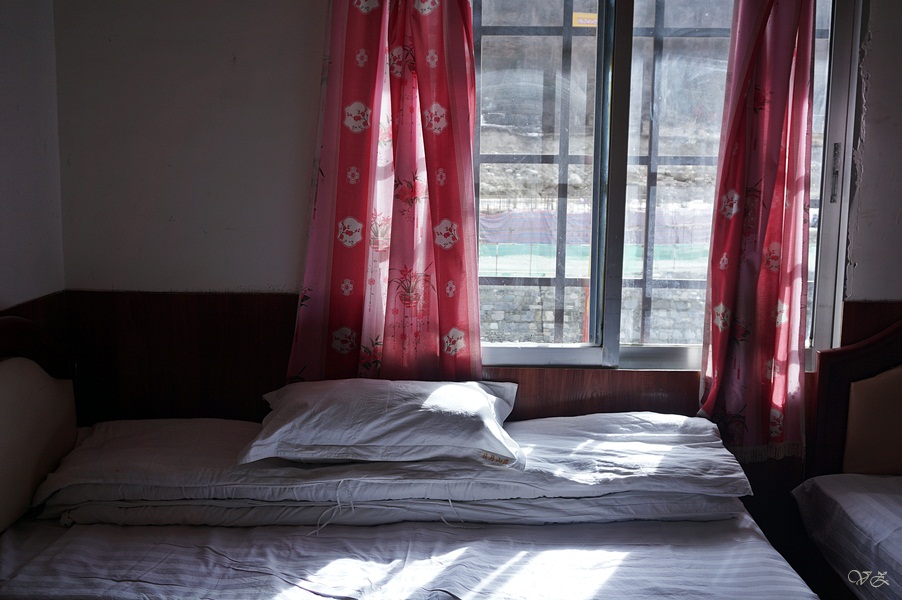 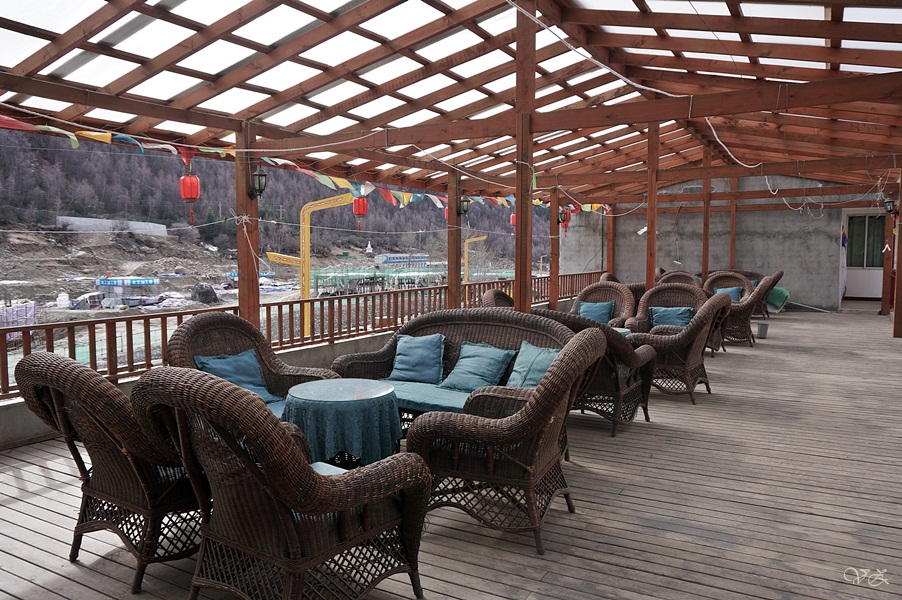 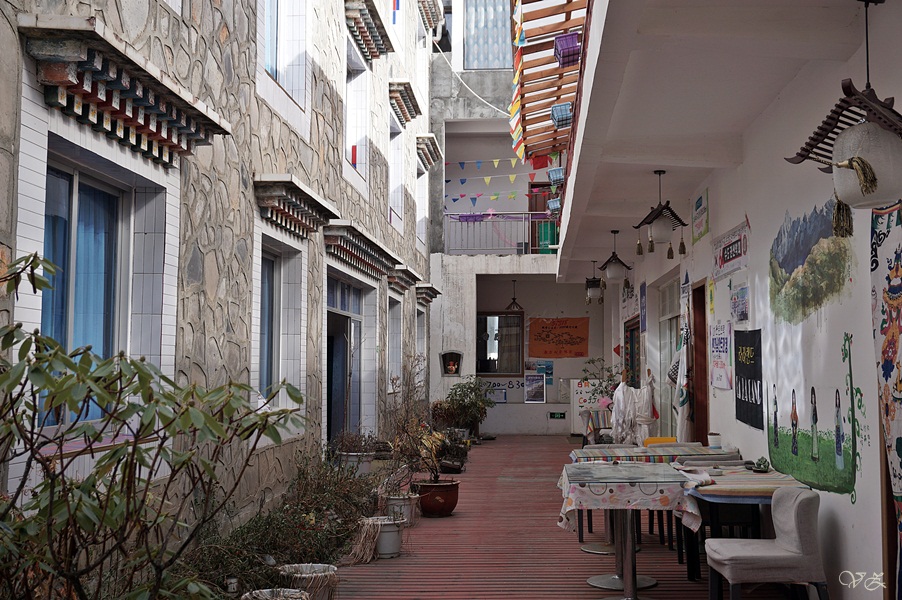 I stopped at the intersection called Changpingtou and walked to the hostel. It’s a quiet town, I barely saw any other people. It was low season, I picked the right time. My hostel was a simple but had a homey feeling in it. A lady greeted me with her Chinese dialect that I couldn’t understand and offered me a tea. A moment later a guy with good English came and did all the check-in process. I just wanted to relax on the first day so I had lunch in the hostel, took a walk around, and just chill for the whole day.

I met a Thai couple staying in the hostel as well and decided to do Haizi Valley on the next day. We started early around 7.30 as the gate was opened around 8 in the winter time. It was freezing in the morning. The entrance of Haizi Valley was in walking distance from the hostel. We followed a wooden stairs for around 15 minutes till we reached the gate.

The entrance fee was RMB 40 in the low season, however I paid only RMB 20 since I have my student ID. Yep, perks of being a student is you get discount for most of the entrance fee in China.  We took it real slow and spent most of the time taking photos. The sun hit the peaks of the Four Sisters Mountain, pretty! Especially when we reached the Zhaijie and Guozhuang meadow, the view was just captivating. A huge huge open area, Tibetan flags, and Yaks roaming around. 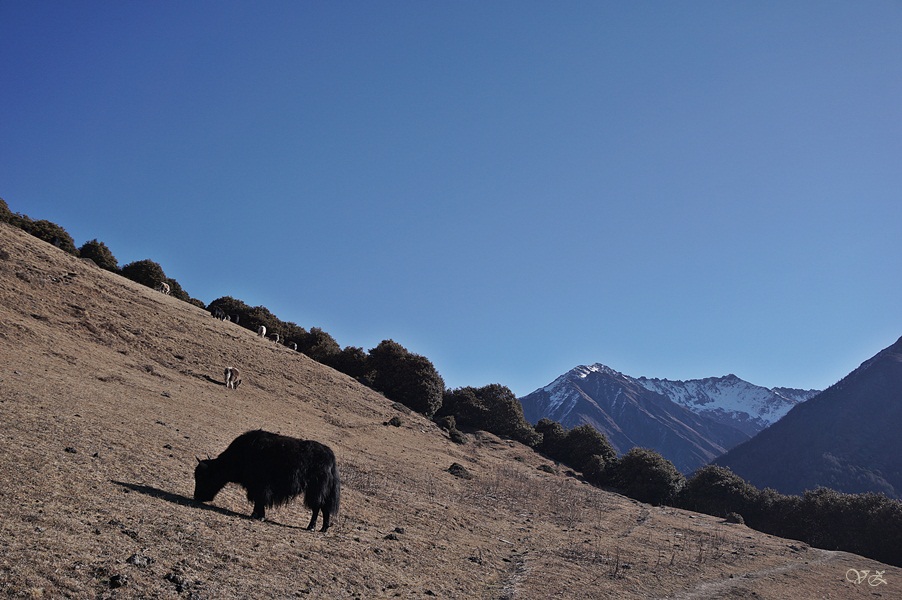 I continued the hike by myself cause I wanted to reach Dahaizi Lake. It was still good kilometers away and noon was coming, I better rushed since my two friends were still taking pictures. The walk was alright, it’s getting more covered up by trees so the view was pretty much the same. There’s no one except me until two horses surprised me. They were carrying bags and other stuffs. I guess they’re carrying stuffs from hikers who did the peaks.

The route in Haizi Valley is also the starting point to hike the four peaks. I would love to hike them as well, a good preparation would be needed of course. The highest and second peak, Yaomei Feng (6,250m) and Sanfeng (5,355m) are only for professionals. Erfeng (5,276m) and Dafeng (5,025m) can be done by beginners, well at least a bit of experience. 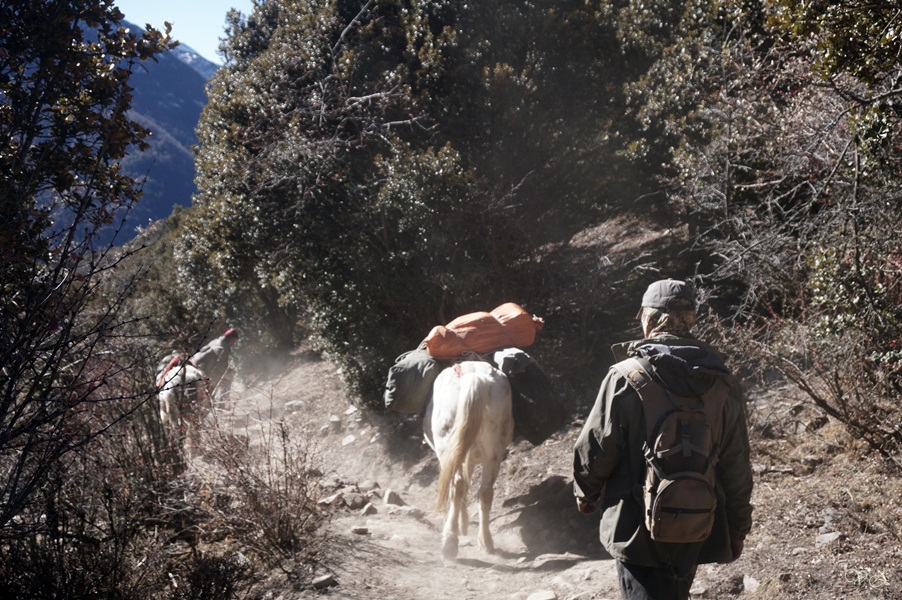 After walking for a few hours (I don’t really recall how long it was), I saw a wooden house as a rest point, also the intersection towards the peak and Dahaizi Lake. I took a quick rest. The woman reminded me to head back at 2 p.m. or it’d be too dark to get back to the entrance. I got to the lake on time. I enjoyed the view, must be amazing during spring or autumn. No leaves on the trees as it’s winter so the scenery looked dull. I headed back quickly and met my friends again on the way. We reached the hostel around 6 p.m, total hike return to Dahaizi Lake is almost 30 km return. 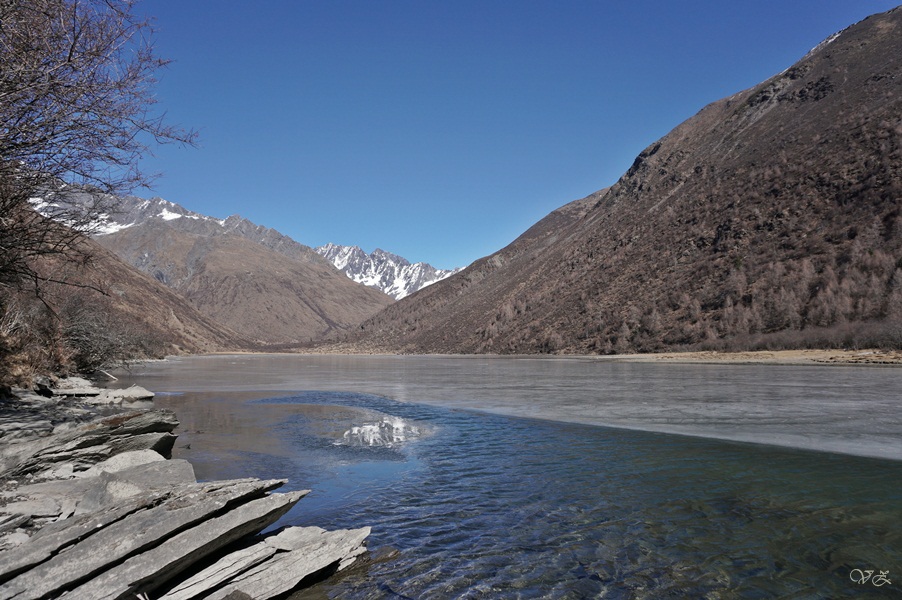 If Haizi valley is more like unspoiled-nature kind of walk, Shuangqiao Valley is the opposite. It’s very convenient with shuttle buses available from one point to another. But the view…WOW! Seriously it can compete with New Zealand. I knew that it’d be interesting, I could tell by looking at the map. High mountains both side, however it’s just beyond my expectation. I was speechless. Snowy peaks, glaciers, plus icy stream and lake. It’s just spectacular.

We got a new companion, a guy from Netherlands who coincidentally had worked in Jakarta. We talked a lot about Indonesia, sometimes he knew a lot more than me. Shuangqiao Valley is a bit of distance from the hostel so we had to arrange a transport helped by the hostel itself. We paid for the entrance and the shuttle, in total RMB 80 for me. We hopped on to the van and it drove us 30 km to the end. 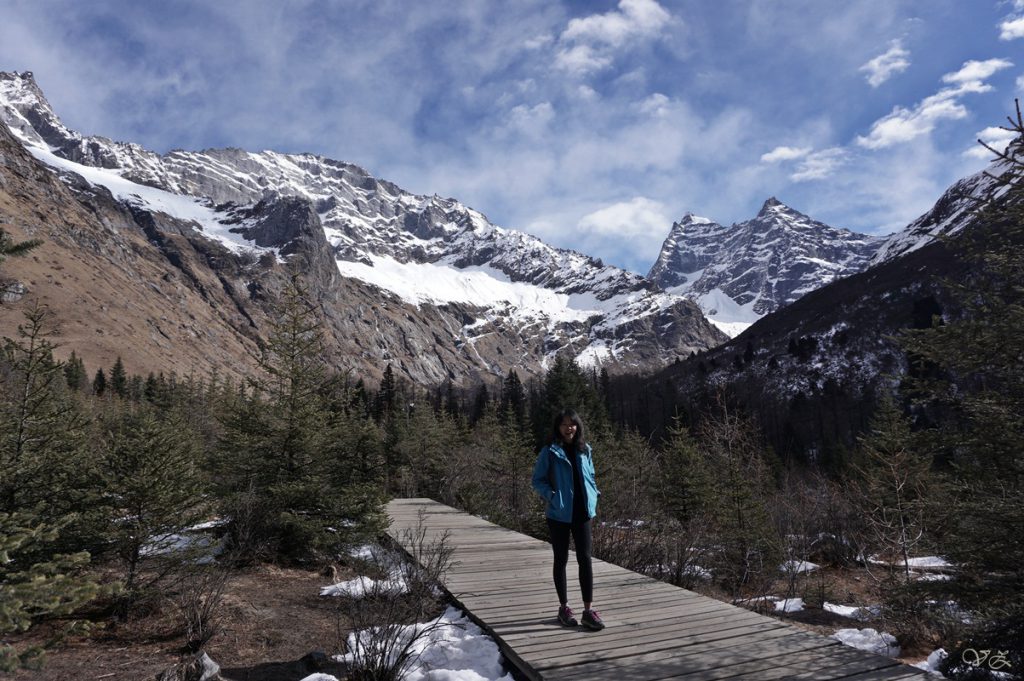 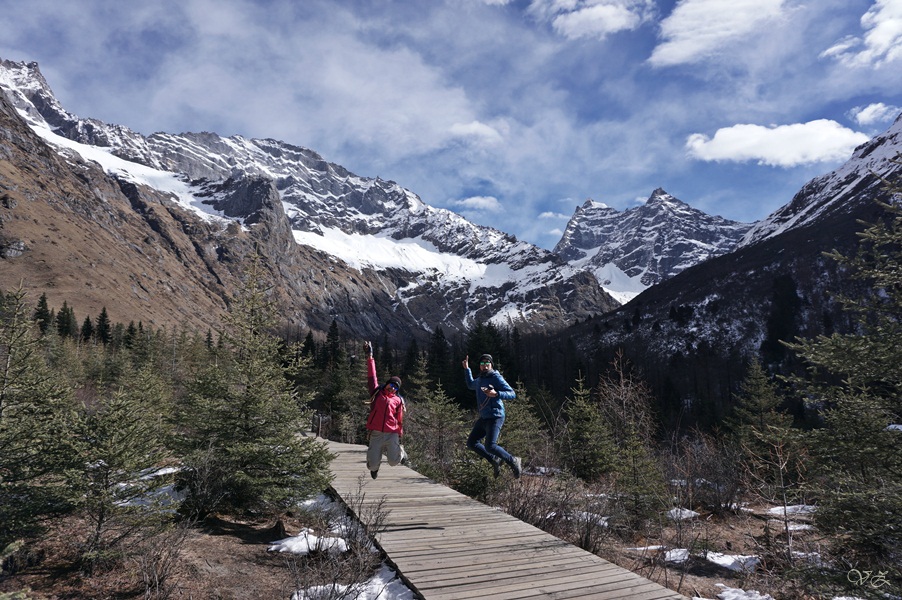 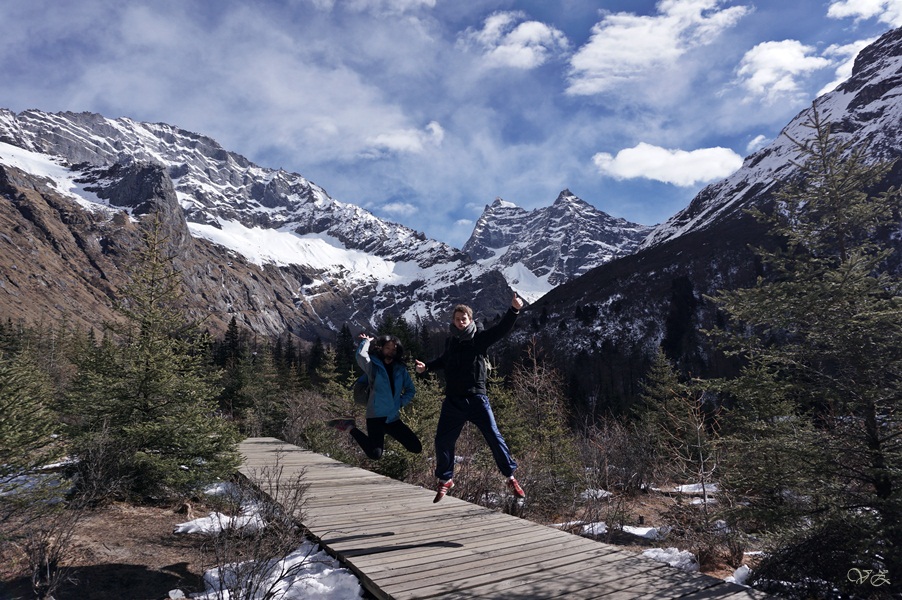 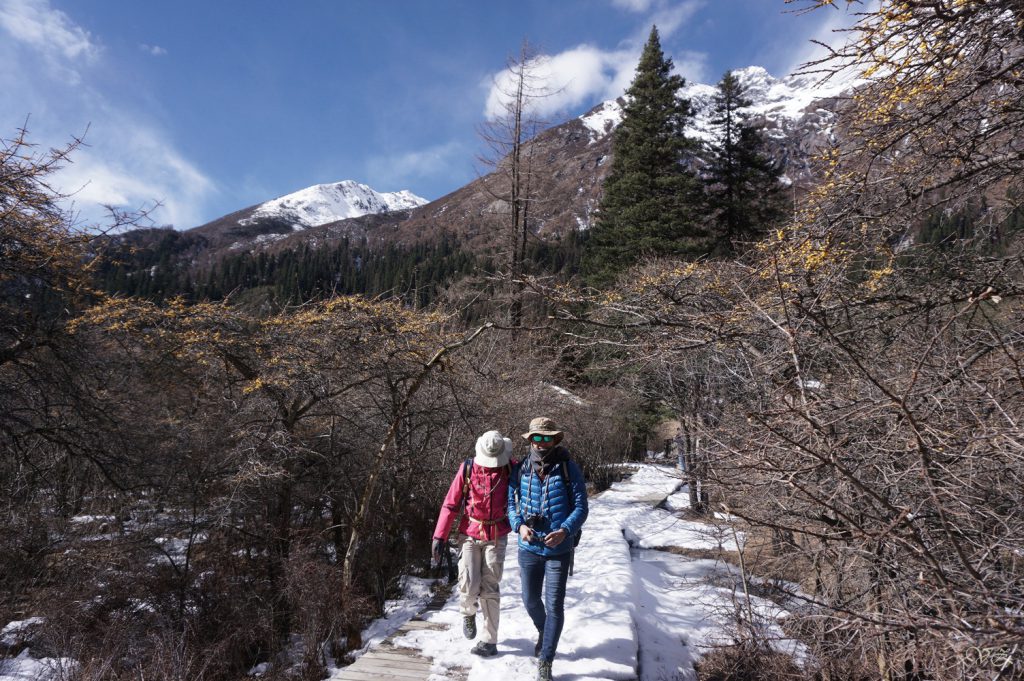 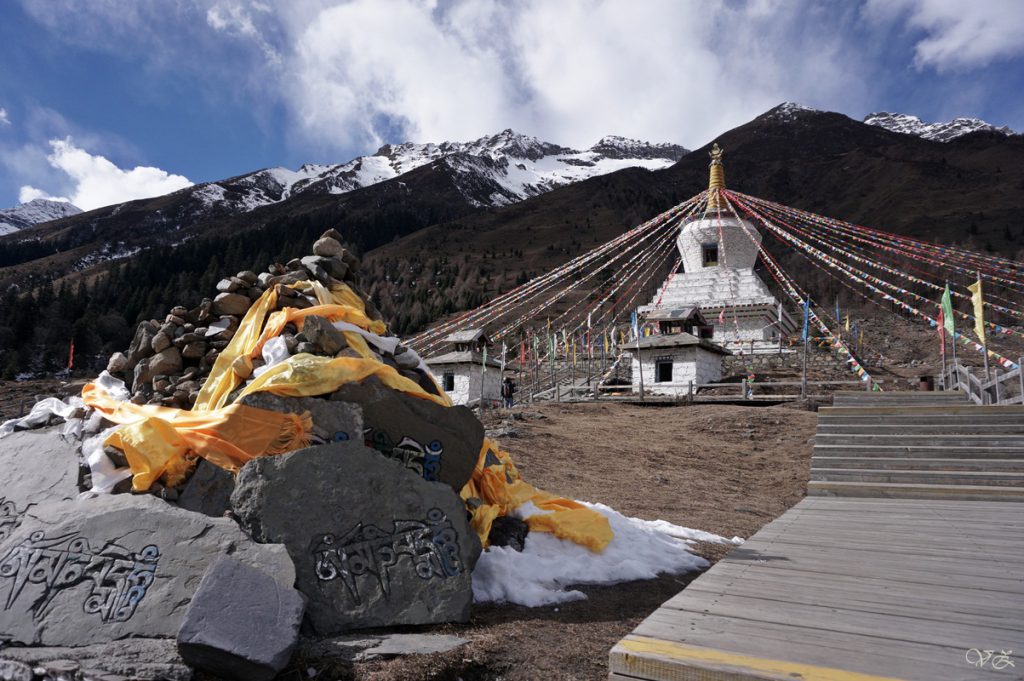 The weather was perfect, blue sky with a brush of white clouds. From the end, we followed the well-built broad walk. Some parts were covered with snow. We chatted, mesmerized by the view, and kept walking until we saw a massive stupa. FYI, Aba Prefecture or where Siguniangshan located in, is home to Tibetan People. You can still see them wearing their beautiful traditional clothes. I myself saw two guys and they wore this real-fur hat.

After looking around the stupa, we decided to hop on to the shuttle and get off in a lake. We took a walk around the lake and found the part of the lake was frozen. Pictures time. I was very excited since it’s a new thing for me, standing on a frozen lake. The day passed really quick, and we found ourselves heading back to the hostel again and wrapped it up with a nice big dinner together. 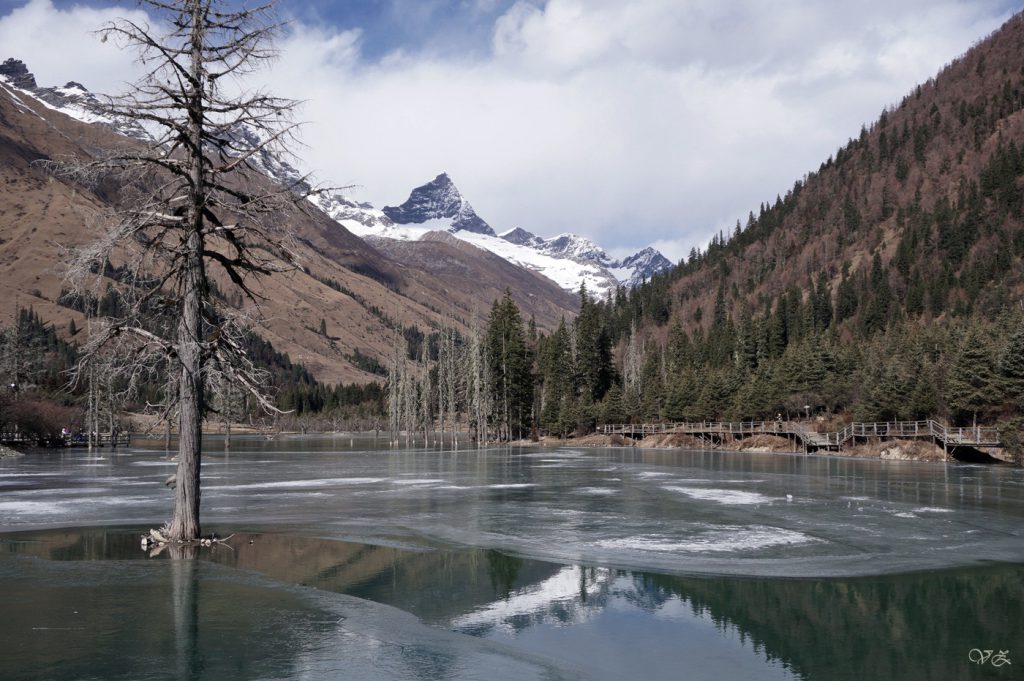 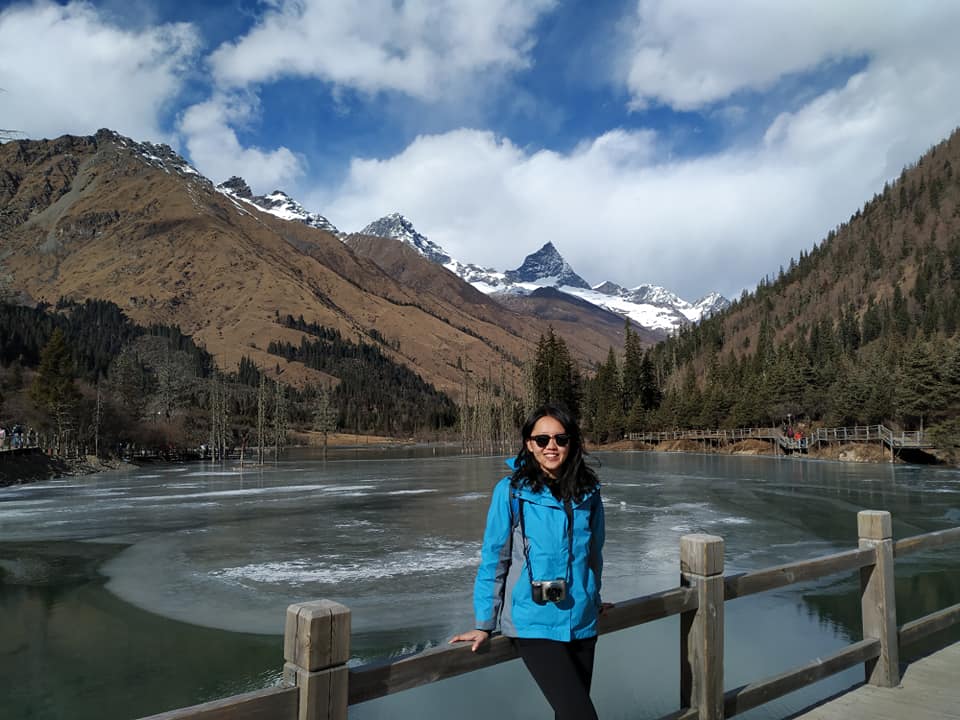 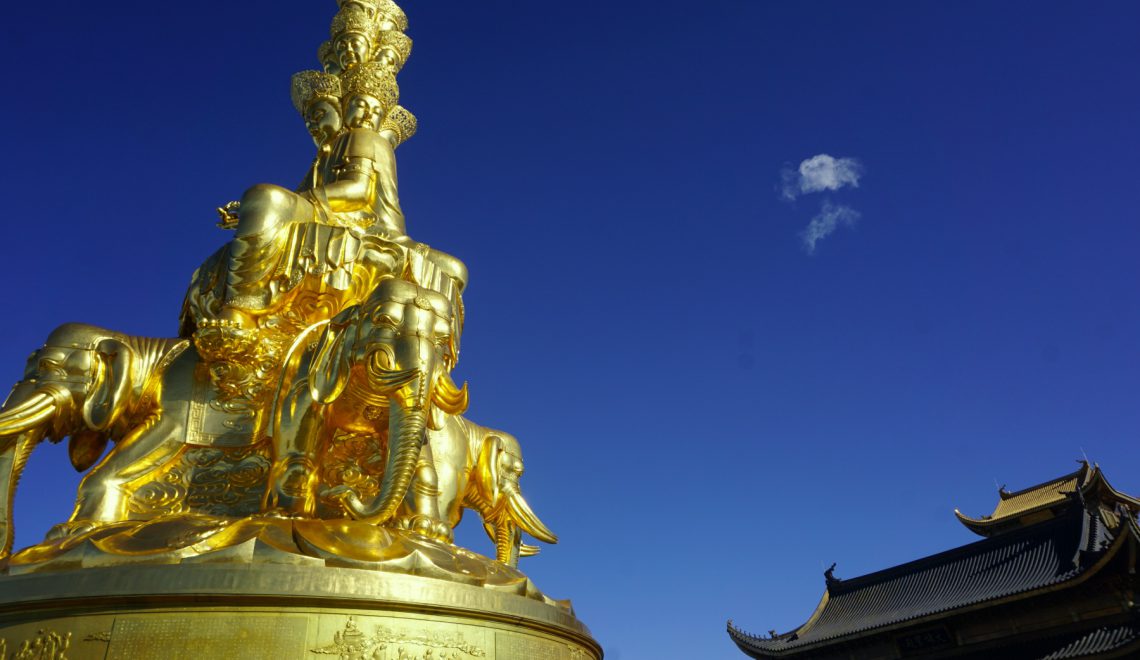 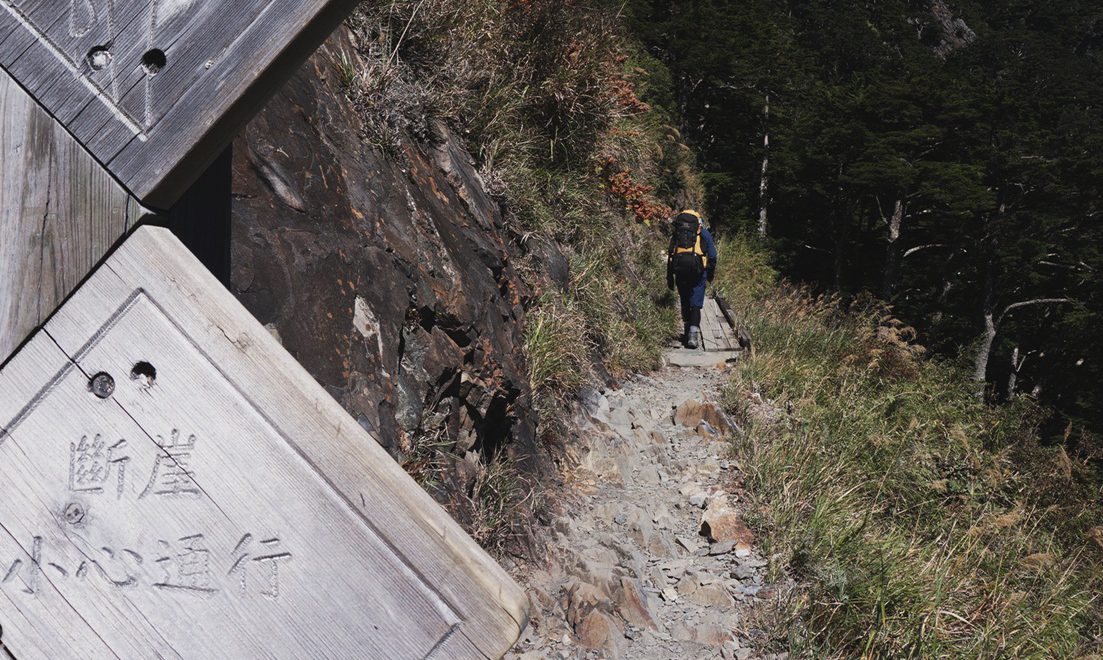