My Moment in Sunshine Bedz (Part 2)

Been following my previous story about moments in Sunshine Bedz? Curious? Or maybe not? Haha. Here comes to the end, I shared this story for fun and as a note to remind me, so that when I grew older and browsed through my old files, once I had this special moment in my life.

During the day I behaved as a good staff, when the sun set down, still I behaved good ;p Patrick often throw a small party, just chilling, drinking and maybe dance a bit at Changkat (bar street) which is literally just five minutes away from our hostel and sometimes I joined as well, maybe every night when I just first started haha. You know, travelers life, travel, party and having fun. Many guests were excited to join as well, getting know each other better, drinking, dancing, and seducing each other. Sometimes some guests trying to hit on me, flirting around, I faced it many times but I just ignored them.

There was this Spanish guy, he troubled me during the day because he wanted to extend and upgrade the room. He’s unfriendly so I didn’t really care of him. When all of us went to bar street, he joined as well. He’s acting nice now. The way he spoke, I thought he was a gay cause he looked like a gay. Very short pants, sleeveless, he has that buff body, how he speak and how he dance indicated “gay” type, you know what I mean. So cause I didn’t want being hit by normal guy, so I danced with the girls and with him, he’s a good dancer by the way.

He grabbed me to the corner and stood few inch away in front of me. “You have to sleep with me tonight”. What? no chit chat and suddenly asked me to sleep with him. I tried to be nice to him and politely refuse by making excuse, “Sorry, I’m a staff and I’m not allowed to sleep with guest.” He kept insisting and said “But you like me right?’ Hello? what the hell is going on. Look at yourself at the mirror. “No.”, I replied. “Fine, then I will cancel the room that I booked just now.” Whatever. The next day, he left after making trouble, peeing on the shower room and complained the room was stinky. Crazy guy.

I could only stay a month in Malaysia so I had to do visa run either to Thailand or Singapore. My first visa run was in Thailand. I took night bus to Hatyai, stayed for a couple of days and went back to KL. Nothing much to do in Hatyai, who cares it’s just for visa run. I was on the bus going through the border, lined up to get my stamp out until the officer checked my passport and suddenly asked me, where’s your stamp? Wait, I checked my passport. There’s stamp if I went out from Malaysia but no stamp showing I entered Thailand. He called another officer and told him I entered Thailand without stamp, which means illegal. O M G !

I had to take my bag from the bus cause they could not wait for me, I was left by the bus. Another officer which I doubt if he was an officer cause he didn’t wear uniform like everybody does. He scolded me, “Where’s your stamp?” I was a bit scared but I tried to act as calm as I could. “I could explain..” “No! I don’t care, you entered the country without stamp, it’s illegal, YOU’RE GOING TO JAIL.” Starstruck? no it’s thunderstruck. Suddenly, my mom’s face came across my mind. I couldn’t imagine if I went to jail, surely she would cry alot and her heart would be so broken. Then, I imagined locked up aboard in natgeo channel. For how long I’ll be in jail, do my family has money to bail me out? Again I tried to explain to him, he didn’t bother me kept saying I’m going to jail.

He took me to a room, two officers in that room. He talked to them in Thai, I had no idea what they’re talking about. He left, and I had to wait. I sat in front of an officer, he checked my passport, I explained to him. “Look, I took bus from KL last night and reached the border at 4 a.m. I was sleepy, I passed Malaysian immigration and headed to Thai immigration. I gave them my passport, without saying anything he gave me back my passport and using his hand go away. Cause I was so sleepy, I though it was done so I passed through and nobody stopped me. What happened was I didn’t fill up the address part in the form they gave in, so he actually asked me to go back and filled it but I thought differently.” I explained everything but the officer kept quiet, didn’t say anything. I showed him the prove, my bus ticket, he didn’t say anything. He couldn’t speak English I guess but he understood me. He flipped back my passport page, and stamp on my passport, He smiled and I could go back. Thank God !!! I thanked him, he just smiled. I don’t know your name but you save my life!

There are ups and downs working in the hostel. Facing different character of people are not easy, especially some people with annoying attitude. Nonetheless, I miss the ambiance, the vibe, the people, and the joy. Some groups of people who stayed longer or kept coming back couple of times had become a part of our family. Even though I had left, I wouldn’t forget that moment, I’m sure some guests felt the same as well. Sunshine Bedz is not just a hostel, but it is a home. Thank you Stephanie who introduced Sunshine Bedz to me, thanks Patrick, without his presence Sunshine Bedz won’t be alive like this. Thanks Sunshine Bedz team that I worked with. Yani, Elly, Oli, M, Robin, Hisham, Vierra, Peter, Steve, Tracy, William. Thanks to the craziest guest I’ve met. Wilko, A.T, Shivam, Jacky, Irene, Charlie, Ruben, Divya, Vinay, Marie, Travis, Verena, Sarah, Stefan, Niels, Maria, Alicja, Ahmed, Yunhui, Yannick, Andre, Layla, and many more. Sorry if I missed some names but I will miss you guys! 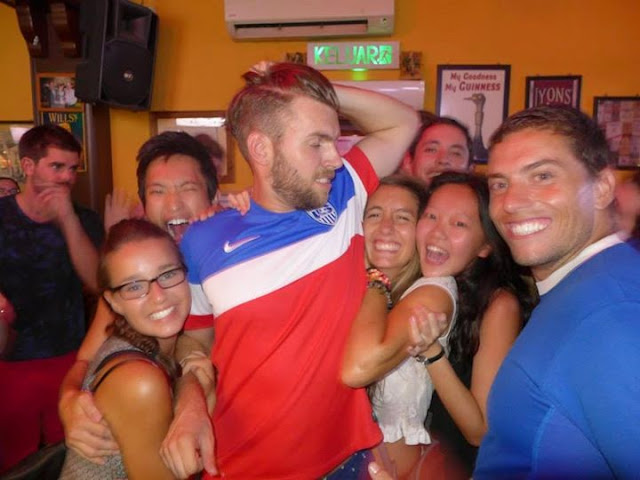 Bali
Life in Bali: 8 Amazing Things That Happened to Me