If you happen to visit Indonesia and looking for accommodation to stay, there are innumerable hotels in each corner of the city and for sure it’s confusing. You might look for the cheapest hotel through booking engine such as agoda or look for the best rating hotel through tripadvisor but before you do that, let me familiarize you with a hotel named HARRIS. Why HARRIS Hotel? The trendy mid-scale hotel currently spreads in 8 big cities in Indonesia including Jakarta, Bali, Bandung, and Surabaya. Here are the five things about HARRIS Hotel which distinguish them from other hotels:

TAUZIA sounds Arabic and so Indonesian to me which leads me to misperception that it is owned and run by local Indonesian. Apparently the owner, Marc Steinmeyer is a French and the name TAUZIA is derived from an oak tree that grows in Southwest France. Then it make sense why the logo is an oak tree. Established in 2001, TAUZIA has undergone a network of 111 hotels (May 2015) in operation and developing various brands, including HARRIS Hotel.

If you see an orange building or sign from afar, you can directly guess it’s HARRIS Hotel. Yes, orange color is their identity. Even the interior and the decoration, their staff’s uniform is full of orange. Orange means something bright, fun and dynamic. A concept that they offered for the customers.

So, their concept about orange is not just a concept without action. HARRIS Hotel also organizes creative events such as fun bikes, photo hunt competition, etc. An event that I actually experienced by myself was during the opening of new HARRIS Ciumbuleuit in Bandung, 8th May 2015. Something that was totally new and fun for me. In the afternoon we had a convoy using Bandros (Bandung Vintage Vehicle) accompanied with vespas and old vintage cars, not forgetting the music along the way. The party had not over yet. The peak event, DiscGlow Party was organized in the same day. Time to dress up with old-school fashion style and dance under the glittering lights with retro musics and funky performances. It’s totally a memorable experiences, especially combined with local dishes that spoiled my tummy, yummy! 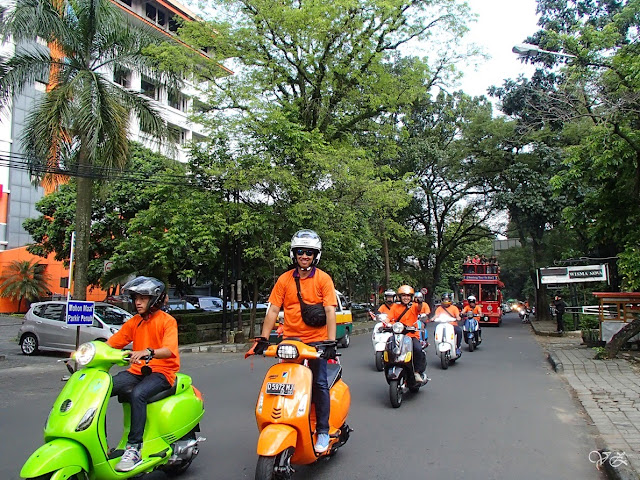 One thing I admired most about HARRIS Hotel was their seriousness in promoting healthy life style concept. They don’t use msg for the food, less sugar, they have juice bar where you can drink juice from fresh food, high quality of groceries. You can also find signs and information about healthy tips on the table, on the wall, everywhere. I think this is their competitive advantage compares to other hotels. I haven’t found any other hotels in Indonesia which really concern about this campaign.

You will see unique local decorations when you enter the hotel and your room. I love the beautiful black and white picture hanging on the wall with human interest as the object. Even though they have this fun and dynamic concept, they also blend cultural side so the guest can also indulge themselves and feel like this is Indonesia, another strong point from HARRIS Hotel.

Those are some interesting facts that I could write about HARRIS Hotel based on my personal experience. To be honest I’ve heard about them before but the willing to stay never come across my mind until I experienced it by myself and found out, wow, this hotel is different from other hotels, that’s why I recommend this hotel. More basic information about HARRIS Hotel can be searched through their official website.

In this chance I would love to share this experience to you by giving a small giveaway. How? It’s really simple. Just describe what orange color means to you. The person with best answer will get a voucher of one night stay in HARRIS Hotel Seminyak, Bali (valid till Nov 2015), and the runner up will get two vouchers worth Rp 300.000 which you can exchange for any meals in HARRIS Hotel Ciumbuleuit, Bandung (valid till Aug 2015). Give a shot, guys, I will wait for your answers until 31 May 2015 🙂

Invited on 8-10 May 2015. Thanks to TAUZIA Management, HARRIS Ciumbuleuit, HARRIS Festival Citylink for inviting me and giving such a warm hospitality.

China
25 Things to Do in Macau Besides Gambling